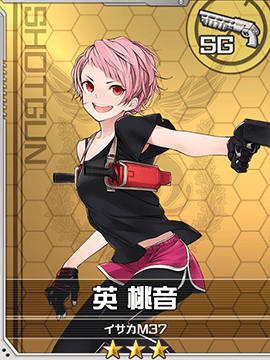 <CHARACTER STUFF. YADDA YADDA THIS IS PLACEHOLDER. SOMEONE WHO READS JAPANESE REALLY NEEDS TO COLLATE THE CHARACTER INFO FOR US>

Capacity: 4, 5 or 7 round tubular magazine

The Ithaca Model 37 shotgun is the longest continuously-produced shotgun in U.S. history. Made in large numbers for the civilian, military, and police markets, it is a typical example of the Pump Action "Home Defense Weapon". Based on patents from 1915 by John Browning, the Ithaca 37 has been in use since 1933.

The Ithaca 37 is unique in that it both loads and ejects shells from the bottom ejection port, making it popular with both left and right handed shooters.

Retrieved from "https://shootinggirl.fandom.com/wiki/Ithaca_37?oldid=956"
Community content is available under CC-BY-SA unless otherwise noted.