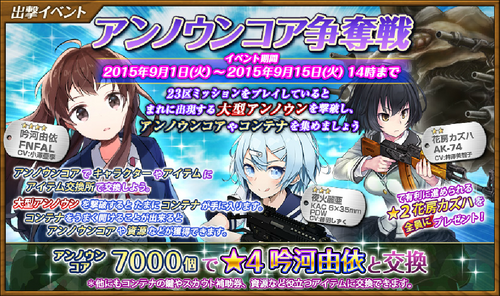 After 2 hours or after you have defeated the boss, the "gate" will be closed, and you will have to "open" it again to defeat the next boss. Defeating the boss counted for B-, A- and S-rank. There are totally 50 areas in the event map, each guarded by a single boss.

By defeating bosses, you will receive "Unknown Core", which you can use to exchange for various rewards. For each 5 areas you cleared, you will receive a special reward (lots of resource) from Quest. Clearing area 1-50 will give you 100k Money and 10k resources each.

Some of the rewards:

These are information that we noticed but am not 100% confirm yet of why it happen/how.

Below are what was confirmed

Container - What is it?

There is also a low chance that the boss will drop "Container", which you can use "Container Key" to open to receive additional rewards.

Each level, boss's HP will be increased by 5000 and ATK by 26. All bosses have counter-attack skill.

Retrieved from "https://shootinggirl.fandom.com/wiki/Unknown_Core_Competition?oldid=3280"
Community content is available under CC-BY-SA unless otherwise noted.