PLEASE REFER TO THE TEMPLATE PAGE OF GUNINFOBOX FOR COLOR AND INFOBOX REFERENCES. THANK YOU.

Due to the increasing contributors in Shooting Girls, contributors have been editing this wiki in their own way. This is a good start for this wiki, but a evenually led with a problem with different formats in different page.

Today I'll talk about the page of Gun Girls.

To be serious, I've used the format #1 for the pages I've edited, but eventually another good format came up in other page.

We might need to vote for it, and it is even better if you have said your reason or what makes to be a good format for this game. Other format suggestions i.e. Kancolle Wikia's format, are allowed.

Also I've made a Template(Template:Guninfobox) in reference to Kancolle Wikia's Shipinfo cards to show all the stats of a girl. 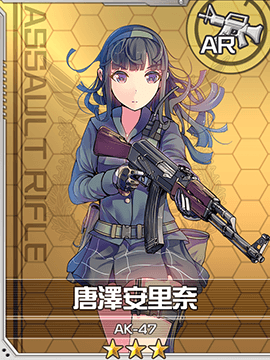 <CHARACTER STUFF. YADDA YADDA THIS IS PLACEHOLDER. SOMEONE WHO READS JAPANESE REALLY NEEDS TO COLLATE THE CHARACTER INFO FOR US>

The AK-47 is a selective-fire (semi-automatic and automatic), gas-operated 7.62×39mm assault rifle, developed in the Soviet Union by Mikhail Kalashnikov. It is officially known in the Soviet documentation as Avtomat Kalashnikova.

Probably the most famous firearm of all time, the AK-47 is known for it's long service life, resilience to damage, ability to operate under even the worst conditions, and an above average stopping power. The AK platform has saw more active service than any other rifle in the world.

Break 2
Add a photo to this gallery

This is made with my template.

(Will be a template later.)

Retrieved from "https://shootinggirl.fandom.com/wiki/User_blog:Kololz/Blog:_The_format_of_a_Gun_Girl_Page?oldid=1320"
Community content is available under CC-BY-SA unless otherwise noted.