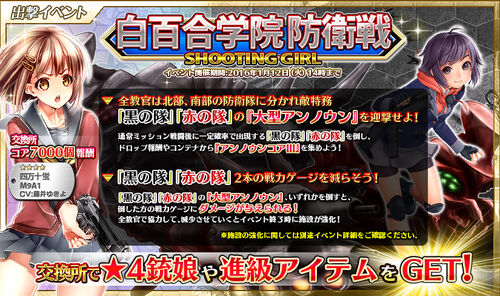 After 2 hours or after you have defeated the boss, the "gate" will be closed, and you will have to "open" it again to defeat the next boss. Defeating the boss counted for B-, A- and S-rank. There are totally 50 Black/50 Red areas in the event map, each guarded by a single boss.

.As usual, their stat comparisons to currently released guns

★4 SMG MAT model 1949 HP: 1st ATK: 6th DEF: 5th ACC: 10th EVA: 1st SPD: 1st Growth: Normal Skill: While Leader, increase the party's evasion by 4% and speed by 40. Really powerful leader skill, increasing speed by 40 points. Her evasion is top notch, and her speed matches that of Vz. 61. Her attack is respectable as well, but she seems to have average accuracy. Overall, looks like a very good SMG with speed.

★3 SG Armsel Striker 12 HP: 10th ATK: 10th DEF: 3rd ACC: 11th (Last) EVA: 10th SPD: 1st Growth: Fast Skill: While Leader, increase the party's defense by 3% A fast SG, very different from the other options. She has nearly 100 Speed over Mossberg, going faster than most ARs, and matching average SMGs. Her weaknesses are her poor attack, abysmal accuracy, and slightly lower HP than other SGs. Despite being so low on the list, most SGs have ~3200 and she has 3050 HP at cap. Her higher defense should make up for the difference. Seems like an interesting choice at the least.

★4 HG M9A1 HP: 3rd ATK: 13th DEF: 1st ACC: 1st EVA: 2nd SPD: 1st Growth: ? Skill: ? She's the 7000 Core exchange reward. Despite being 13th in ATK, her max attack is fairly average. Her strengths lie in her ridiculous accuracy, speed, evasion, and defense. She is by far the fastest character in the game now, topping Colt Python by 133 Speed. Her accuracy also tops Python by over 100 points, who was until now the most accuracy HG, and M9A1 is now the most accurate gun in the game. Only Five Seven has more evasion than her.

Retrieved from "https://shootinggirl.fandom.com/wiki/White_Lily_Gakuen_Defensive_War?oldid=3397"
Community content is available under CC-BY-SA unless otherwise noted.